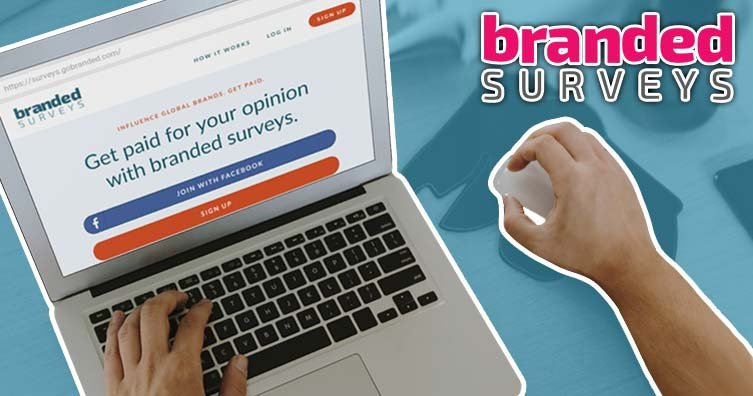 In the world of paid online survey sites, there are few better than Branded Surveys. Read our review to find out how much you could make, plus how to earn even more points.

If you're looking for an easy and flexible way to earn some cash, all without leaving the house, then look no further than survey sites.

In a crowded field, Branded Surveys stands out by offering a streamlined survey experience, sticking to what it does best and doing it well. And what's in it for you? The opportunity to earn points which can be redeemed for shopping vouchers or cold, hard cash – that's what.

Sign up using our link and you'll also get a 100 point bonus to get you started. Perfect.

What is Branded Surveys?

These surveys can be about anything, from your day-to-day habits to what you think the best restaurants are or what TV shows you watch. For every survey you answer, you'll be given points which can, in turn, be exchanged for rewards.

The answers you give on Branded Surveys are then used by some of the biggest brands to inform their decision making, whether that's which products to release next, or which demographic they should be targeting.

Unlike some other survey sites, like Swagbucks or Toluna, Branded Surveys is purely a survey site – it doesn't offer alternative ways to make money, like watching videos or earning cashback on your shopping.

How much do you earn on Branded Surveys?

How much you earn on Branded Surveys entirely depends on how much work you put in. Nonetheless, in terms of pay-per-survey and the minimum amount you need to earn before you can cash out, we'd say Branded Surveys is definitely up there as one of the more generous survey sites.

You'll be paid in points for every survey you complete, and although longer surveys typically pay more, that's not always the case. As the image above demonstrates, you'll occasionally find a slightly shorter survey paying more points than one that takes twice as long.

Regardless of how many you earn, each point on Branded Surveys will always be worth the same amount: 1 cent (USD). This means that 100 points equals $1, and 1,000 Branded Surveys points are worth $10.

This is always the case, which makes it relatively easy to work out the value of your points at any given time (compared to, say, Toluna, where the value varies depending on how you redeem your points).

We say 'relatively', as the fact that points are valued in US dollars means there's no set conversion into pound sterling. Instead, the value of Branded Surveys points varies according to the strength of the pound versus the dollar.

Fortunately, the value of the dollar compared to the pound is largely stable. $1 is typically worth something between £0.70 – £0.80, meaning 100 Branded Surveys points usually equate to the same.

Of course, this does mean that you could get a smaller payout for your points if you happen to redeem on a day when the currency conversion isn't quite in your favour.

If you're worried about getting a rough deal, it's worth bearing in mind that there's no obligation to redeem all of your points at once. So, if you think the dollar is particularly weak against the pound when you're cashing out, you could leave some in your Branded Surveys account and redeem the rest when you're happier with the conversion rate.

What can you buy with Branded Surveys points?

* Reward is paid in the form of a prepaid Mastercard, either physical or virtual.

Although some gift cards can be redeemed for as little as £0.01, it's worth noting that you can't cash out from Branded Surveys until you have a minimum of 500 points.

What's more, as the value of your points is the same regardless of which retailer you go with, we'd recommend going with the likes of PayPal and Mastercard, as you'll be able to spend the money wherever you like (including at some of the other companies, if you so wish).

How do you redeem your Branded Surveys money?

Redeeming your points on Branded Surveys is a fairly simple process.

In the left-hand sidebar (under the 'Menu' tab on mobile) you'll see a button labelled 'Payout Options'. Click this, and you'll be shown all of the payment methods we've listed above.

All you need to do is select how you'd like to be paid, verify your choice via email, and then enter how many points you'd like to cash in. Once your request has been approved, you should receive your payment within one or two business days. Easy as pie.

As is the case with most of the site's competitors, people often ask "is Branded Surveys legit?" – an understandable question given that it seems like such an easy way to make money.

The good news is that Branded Surveys is absolutely legit. As long as you're eligible for the surveys and complete them properly, you should earn however many points each one promises to pay.

In particular, Branded Surveys users are often keen to praise the site for how often it serves you new surveys to complete, and how quickly payments are processed.

However, one issue we found (that many others in the Branded Surveys community have reported too) is that you'll often have to answer a lot of preliminary screening questions before completing a survey, only to be told that you're not a match.

This means you won't earn any points, despite having spent a few minutes answering questions – time that could have been spent completing surveys you are a match for.

That said, this criticism could be levelled at any number of survey sites, and it's certainly not unique to Branded Surveys – so don't let this put you off signing up and giving it a go.

Free lottery draws require even less effort than online surveys, and the rewards can be much higher.

These are the best ways to make money on Branded Surveys:

Like the sound of Branded Surveys? Check out our guide to earning rewards on Swagbucks, another paid survey site.

In terms of flexible and easy ways to make money, survey sites are pretty hard to beat. And, as we've just explained, Branded Surveys is up there as one of the best and most lucrative options.

So, what are you waiting for? Sign up using our link, claim your 100 point bonus and get started!

Speaking of easy earners, did you know that you can get paid to watch videos?