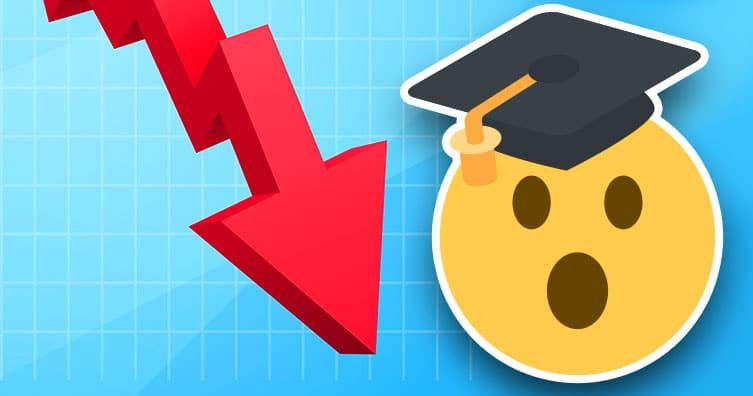 From September, Student Loan interest rates will be going DOWN. But what impact will this actually have on you and your loan? We explain all below…

Interest is added to your Student Loan from pretty much the minute you take it out, so the reduction in interest rates is – for some students, at least – quite good news. We go into more detail about this here.

But first, a bit about how the interest rates are changing. They change every September, based partly on changes to the March RPI (Retail Price Index) from that year. And today, it's been announced that the RPI for March 2021 is 1.5%, down from 2.6% from last year.

So, for students from England and Wales (where Student Loan interest is RPI + 3%), this change in RPI indicates that interest will go down to 4.5% in September 2021. For students from Scotland and Northern Ireland, it's unlikely that there will be a change to your Student Loan interest, but there are more factors at play which we'll outline below.

What's in this guide?

Based on the Student Loan system, we are confident about these figures, but please note that the government will not officially confirm interest rates until later in the year.

Which plan is your Student Loan?

While RPI does affect how your Student Loan interest is calculated, a major part of knowing how much interest you'll be charged depends on when you went to uni and which part of the UK you're from.

Use this table to figure out what plan you're on:

Here's what to expect from Student Loan interest rates in 2021:

You have a Plan 2 Student Loan

So, if you're still at uni, you will start getting charged interest of 4.5% on your loan during your studies.

Once you graduate, the interest rate changes to RPI + up to 3%.

If you've graduated and you're earning under the repayment threshold of £27,295 per year, you'll be charged interest at the rate of RPI.

At this point, it's worth highlighting that you don't start repaying your Student Loan until the April after you graduate, and even then you won't repay any of it until you're earning over £27,295 per year.

Plus, unless you start with a graduate salary of around £30,000 or more, it's unlikely that you'll repay your loan and interest in full before it's wiped after 30 years (in fact, it's been estimated that just 17% will).

Once you've started earning above the repayment threshold, you will be charged interest of RPI + up to 3%.

Anyone earning over £49,130 is charged the full RPI + 3%. Graduates on a salary between these two figures will accrue interest on a sliding scale from RPI up to RPI + 3%.

Find out when (or if at all) you're likely to repay your loan in full with our Student Loan repayment calculator: You have a Plan 1 or Plan 4 Student Loan

And as of 6th April 2021 (the start of the new financial year), students from Scotland are on the Plan 4 repayment system, having previously been on Plan 1.

If you're on either the Plan 1 or Plan 4 repayment systems, the interest rate on your loan is currently set at just 1.1% and, unlike for recent English and Welsh students, it will likely stay the same in September – but it's impossible to say for sure at this point.

But, the current economic climate is very uncertain. In March 2020, the Bank of England base rate changed twice in response to the coronavirus outbreak, so we can't say for sure that it won't change again before September 2021.

Should you be worried about Student Loan interest?

There are definitely some benefits to Student Loan interest rates going down.

For example, if you're on track for a high-earning career, you could have a good chance of paying off your full loan before it's wiped – in which case, the lower the interest is, the less you'll need to pay off overall.

But, as we touched on earlier, it's been estimated by the IFS that 83% of students with a Plan 2 loan will never repay their loans in full before the debt's cleared. So, as it's unlikely you'll repay the loan in full before it's wiped, added interest should make very little difference to the overall amount you repay.

This is because, if you're unlikely to repay your loan anyway, it doesn't really matter whether the interest rate is 4.5%, 45% or 45,000,000% – it gets cancelled after approximately 30 years, regardless of how much or how little you've paid back.

More needs to be done to support students

The reduction in interest is a small improvement, but for most students, this change will have more of a psychological than financial impact.

It could potentially ease some stress to know you're paying less interest on your loan, but there's so much more we want to see the government do to really make a difference to your financial situations.

We want to see the government make more significant changes in response to the pandemic, such as increased support packages and bigger Maintenance Loans or grants that financially help the majority of students now – not small changes that will help a small proportion of high-earning graduates in the future. That's not nearly enough.

Here's how our resident student money expert, Jake Butler, responded to the news:

Many will view this drop in the interest on student and graduate loans as a win for students but don't let that distract you from the fact that it's still way higher than it should be.

This change will do very little to make students feel at ease after a year when they appear to have been forgotten and for what seems the millionth time, it highlights a broken Student Loan system.

With all that said, this change will make very little difference to what most graduates will likely pay back because of the way that the loans work.

Graduates only pay back a percentage of what they earn above a threshold and any remaining debt is wiped after 30 years so any small fluctuations in interest just add or take away from a pile of money that'll never be paid back anyway.

Whilst it will have a positive psychological impact, it doesn't change much from a monetary sense.

If you're keen to find out more about how Student Loan repayments work, our handy guide will answer your big questions.